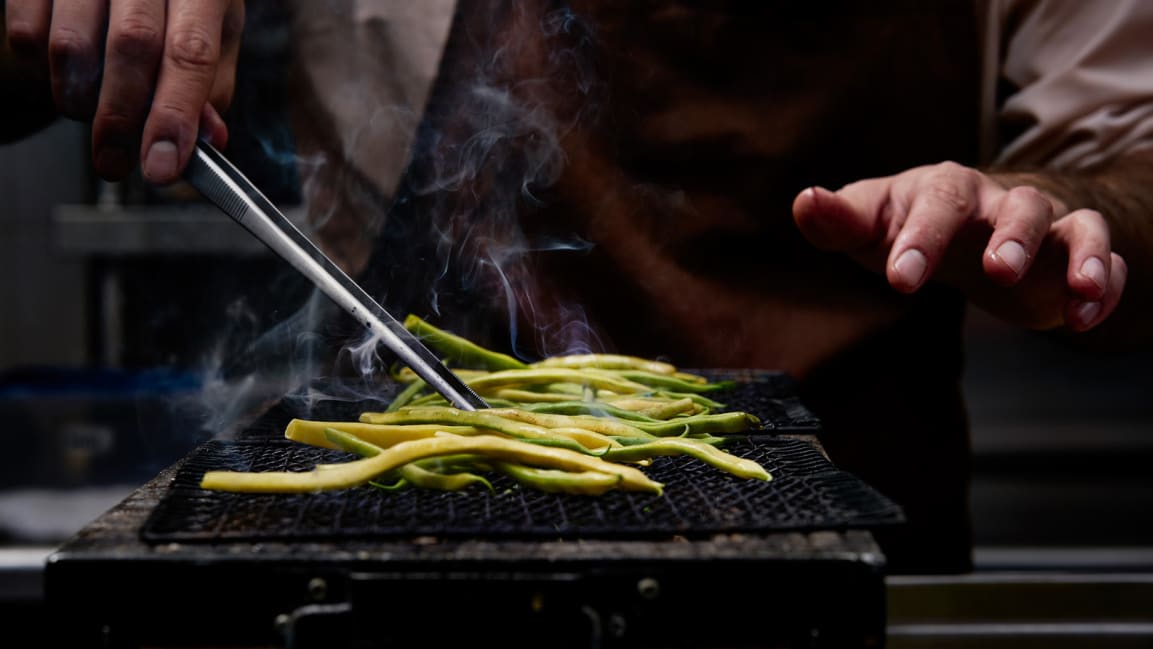 While a growing number of chefs around the world are trying to cut food waste, Helsinki’s Restaurant Nolla (“Zero”) takes it to the extreme: the three cofounders are trying to completely eliminate waste. There’s not even a trash can in the kitchen.

“We’re three young cooks that have been working in different restaurants from casual to high-end and have just been frustrated with the amount of waste that’s created every day,” says Luka Balac, one of the chefs.

When they opened Nolla—which launched temporarily in one location in 2018 and will open in a new location in Helsinki’s Design District on July 31—one of the first challenges was the packaging that came with orders from suppliers. “A starting point was that we would reduce a lot of waste by just asking people to change their packaging or delivery for us, and it was surprising how many big and small companies decided to go forward with our ideas,” he says.

Nearly all of the ingredients, except for olive oil and wine, are sourced locally, but despite relatively short deliveries, the suppliers all used single-use packaging. A local coffee roaster, for example, normally packaged its coffee in vacuum-sealed plastic bags. The chefs helped find an alternative hard plastic container that could be used repeatedly; multiple other local cafes and a large hotel now ask the roaster to use the same packaging. Supplies from farmers come in crates that are returned and reused. In some cases, with smaller producers, the restaurant invested in small reusable containers. Suppliers were often eager to make the changes because it helped save them money. “The change has been visible,” says Balac.

The menu is carefully planned based on what’s in season and how every piece of a vegetable or fish can be used. The restaurant serves a set four- or six-course menu rather than letting customers order specific dishes—another way to reduce waste, because the chefs can avoid ending up with surplus ingredients if a particular item isn’t as popular.

At the end of the night, whatever small amount of food waste is left (and can’t be reused in any other way) goes in the restaurant’s in-house composter to be sent back to farmers or given to customers to take home to their own gardens. Nolla, like larger food-service operations at Google and IKEA, uses software to track what food is wasted so that it can better plan future menus.

Every other detail in the restaurant also gets careful consideration. Gift cards aren’t plastic but paper embedded with seeds that can be planted in someone’s backyard. Instead of paper menus, the chefs list the menu on a chalkboard.

Despite the comprehensive approach, people eating at the restaurant might not hear that much about zero waste. “We don’t preach,” says Balac. “We keep it as a restaurant, and we think people should relax and enjoy it.” He says that the approaches they’ve taken—particularly asking suppliers to change their own packaging—can easily happen at other restaurants. “Just asking for what you want can make a big difference,” he says. The changes in the restaurant’s own practices also weren’t difficult to make. “After two weeks, it didn’t feel like an extra thing. It was a part of our routine.”

It wasn’t the first time I’d traveled by myself, but a week before I flew, nerves flared. What if I spoke to no one for a week? Would people think it weird I was on my own? And would I be safe?

How to Work as a Freelance Journalist?

How Social Media Stars Can Get to the TOP. To know more >> Theinternationalcampaigner.com

3 Reasons That TOP Platform Is The Best Ebooks Hub.

3 Benefits To Going With TOP for Press Release Distribution.

3 Reasons To Check Out the TOP Photo Gallery.

Things to remember when creating content for online lobbying.

An Opportunity With TOP Ebooks Library To Start Earning

Why You Should Trust TOP For All Reputation Management Needs.

4 Main Reasons To Do Online Reviewer Work With TOP.

4 Reasons To Go With TOP For Content Creation Services

2 Good Reasons To Consider Getting Translation Help From TOP.