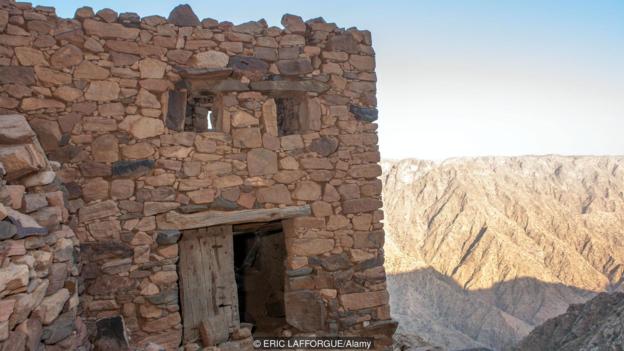 The remote villages of Saudi Arabia

It’s a perfect selfie opportunity in the most unlikely of settings. Four-wheelers wind precariously up the sides of lush mountains, their backseats filled with Saudi families and tourists from other parts of the Arabian Peninsula. As the vehicles make their way through the cool mist, the passengers intermittently pull over to dig for cameras and wallets. Jeep doors are flung open as they approach stalls selling honey, fruit and – the most coveted good – dazzling flower crowns of red and orange blooms. Visitors pose for cameras with the wreaths atop their heads, their best smiles on show for social media.

The flower crowns for sale at sites across ‘Asir province aren’t merely bait for cash-flush tourists seeking to show off to their friends back home. These intricately constructed headpieces are the traditional garb of the so-called ‘Flower Men’: members of the Qahtan tribe who maintain the practice of donning flowers and greenery for the sake of both beauty and health, and now sell these traditional crowns to visitors to the region.

Today, mostly concentrated in the southern Arabian Peninsula, Qahtanis are said to be the oldest social formations in the area, claiming to be the descendants of Ishmael, son of Abraham, of the Hebrew Bible. Their floral nickname comes from the fact that many Qahtani men traditionally crown their heads with intricate arrangements of herbs, flowers and grasses.

You may also be interested in:
• The ancient Samaritans alive today
• The Indian tribe that deals in venom
• The descendants of Alexander the Great?

According to the late researcher Thierry Mauger, the construction of these flower crowns is approached by the tribe’s younger men as a friendly beauty competition: they incorporate as many colourful additions, like marigold and jasmine, as possible. Men of middle age and above, conversely, take a more sombre approach, constructing their wreaths with greenery like wild basil. Some wear them daily for aesthetic purposes, while others adorn themselves on special occasions like major Muslim holidays. Others still wear them when sick, choosing herbs and greenery specifically for their medicinal properties.

But floral crowns are not the only element that sets this tribal group apart from the dominant Saudi culture, popularised by the government elite, most of whom are originally from the Najd and Hijaz regions.

The Flower Men’s home region, ‘Asir, is located atop a plateau that receives more rainfall than any other area of the kingdom. In May and June, temperatures in the country’s interior cities can top 30C, but ‘Asir province, some 900km south-west of the capital Riyadh, greets unprepared tourists with chilly winds and the occasional rainstorm. Its peaks, the highest in the country, host agricultural terraces carved into the mountainside by its inhabitants who subsist on small-scale farming of wheat, coffee and fruit.

The headpieces are donned for the sake of both beauty and health – some are made from flora believed to fend off headaches or sinus maladies (Credit: ERIC LAFFORGUE/Alamy)

The Qahtan tribal group has had a trying history. In Arabic, ‘Asir translates to ‘difficult’, and it is this challenging remoteness of ‘Asir’s jagged cliffs, according to local folklore, that led a handful of Qahtani families to flee here from the surrounding lowlands to escape the invading armies of the Ottoman Empire more than 350 years ago. Following the occupation of ‘Asir by forces loyal to the House of Saud, the region was incorporated into the Saudi nation in 1932.

Living in small, self-governing groups in the mountains, the Qahtani villages were barely accessible – for both protection from surrounding tribes and political autonomy – until the late 20th Century. The settlement of Habala (derived from the Arabic word for ‘rope’), for example, was only reachable by a network of handrails and rope ladders. The construction of a cable car in the 1990s by the Saudi government increased access to the remote area, but also highlighted issues concerning the integration of tribes into the national identity and whether these unique cultures can withstand modernisation.

The mountainous province of ‘Asir, meaning ‘difficult’ in Arabic, appealed to the Qahtan as it provided autonomy and protection from invasion (Credit: ERIC LAFFORGUE/Alamy)

But, despite the odds, many of the Flower Men’s customs have indeed survived. In fact, the practices that risked being forgotten now serve to attract tourists to the region. In small eateries dotting the winding runs of Jabal Sawda, Saudi Arabia’s tallest peak, Qahtani servers festooned with bright blooms bring hot plates of goat and rice to locals and visitors. Guides at Habala greet visitors wearing colourful striped cloths draped at the waist. In comparison to the austere garments worn by women in the drier, hotter regions of the country, the Qahtani women traditionally wear closer-cut styles that keep them warm when temperatures drop. Although they don’t wear the flower-laden headpieces, headscarves and cloaks display intricate geometric embroidery and tassels are festive in bright yellow, blue and red.

Travelling in the region, one can’t help but marvel at the mud and stone buildings, dating back more than 200 years, that look like earthen mini-skyscrapers. These homes were constructed in close arrangement in tribally grouped communities, reminiscent of dwellings found in the Yemeni cities of Sana’a or Shibam, demonstrating that a common culture between the two states precedes the establishment of modern borders.

‘Asir province’s mud and stone buildings are similar to those seen in Yemeni cities like Sana’a, demonstrating a common culture between the states (Credit: ERIC LAFFORGUE/Alamy)

Curious visitors crane their necks to get a good look at the watchtowers, which, though no longer in use, rise above the residential quarters. The buildings boast complex architectural details that allow the homes to withstand the realities of ‘Asir’s climate: drainage systems that prevent rainfall from accumulating on roofs; a density of bricks to promote thermal retention and acoustics; and the homes’ few, small windows and bright-blue borders, two elements said to keep both mosquitoes and evil spirits at bay.

The inside of these homes are a visual treat all unto themselves. Interior walls – particularly in the majlis, the room designated for receiving guests – are painted in an array of bright blue, green, red and yellow, the geometric designs reflecting the patterns that have come to define an essential element of ‘Asir’s identity (and were inscribed on Unesco’s Representative List of the Intangible Cultural Heritage of Humanity in 2017).

Today, these murals take their inspiration from the architectural symbols that, in the past, told visitors about the inhabitants of the house: patterns, shapes and shades informed others of the age, gender and make-up of each family. Repainted each year during the hajj season, a month dictated by the lunar calendar when Muslims make the pilgrimage to the holy city of Mecca, these decorations are the work of local women who transmit the art form inter-generationally by inviting relatives of all ages to aid in the annual upkeep.

But most of the tiny, isolated villages atop the highest peaks are empty.

Government projects, like a cable car to the settlement of Habala, have increased access to the remote ‘Asir region (Credit: mauritius images GmbH/Alamy)

As part of a project to make the region more accessible to tourists, in the last half of the 20th Century the Saudi government forcibly relocated residents of villages like Habala, settling them in newly constructed developments with access to better infrastructure, services and schools. Their villages now operate as sites for tourists to explore ‘Asiri culture; the Flower Men only return temporarily to their ancestral villages to give tours, perform staged demonstrations of traditional regional dances and build their businesses around the tourist economy.

Herein lies the paradox of this underrepresented region: the slow trickle of modernisation chips away at indigenous ways of life, but an increased interest from the outside brings with it the possibility of safekeeping customs at risk of disappearing. Habala, due to its picturesque landscape and history of near-total isolation, has received particular attention from tourists.

But this doesn’t mean Qahtani culture is being completely eroded. Though many Flower Men now depend on the tourist economy to support their families, interest in the province has led to opportunities for locals to engage in their own cultural preservation. After many years of a national economy made wealthy by its oil reserves, Saudi Arabia’s Vision 2030, which aims to lessen dependence on oil revenue in the decades ahead, includes plans to strengthen cultural programmes and the tourism sector. An allocation of nearly $1 billion dollars has been set aside to restore heritage sites, including those in ‘Asir.

Many Qahtani customs have survived contact with the outside world, including the colourful murals painted by women on the walls of their homes (Credit: ERIC LAFFORGUE/Alamy)

While many top-down initiatives like those of Vision 2030 focus on simply preserving the past, other projects are concerned with incorporating local knowledge with cultural and economic production.

In 2017, the organisation Art Jameel taught local artists the skills necessary for digitally recording traditional ‘Asiri mural paintings, with the goal of developing producers at the community level who will support traditional arts and crafts. Similarly, Dar Al-Hekma University in Jeddah spearheaded a project in 2014 entitled Reinventing ‘Asir that uses media, science, art and technology to encourage the preservation of architecture in tandem with supporting contemporary art, sustainable local development and agriculture.

“Since the ‘Asiris always proudly lived off the land and built their houses in a self-sustained manner,” explains the project’s mission statement, “they are in fact again at the forefront of what are considered globally cutting-edge trends.”

Today, the Flower Men only return to their ancestral villages to build their businesses around the tourist economy (Credit: ERIC LAFFORGUE/Alamy)

When night falls and the tour buses make their way to nearby hotels, the mountain villages like Habala again sit empty. It’s difficult to preserve your flower crown once you’ve left ‘Asir: after a few days, the blooms dry and flake with even the lightest touch, and the basil and jasmine lose their scent. Though much of ‘Asir’s recent economic success has focussed solely on the preservation of local history, hopefully these new initiatives that aim to bring locals into the decision-making process will allow ‘Asir to be a culturally unique place of the past, as well as have a blossoming future.

“[The] fact is that any true identity emerges from both: the past and the future, memory and invention,” said Anna Klingmann, head of the architecture department at Dar Al-Hekma University. “If we prioritise one over the other, neglecting either memory or invention, the future or the past, part of our identity suffers.”

Ways For Social Media Influencers To Make Some Money.

EVERYTHING BUSINESSES NEED TO KNOW ABOUT FOREIGN DIRECT INVESTMENTS.

Benefits of Foreign direct investment to the recipient country.

4 Reasons All Photographers Need To Sign Up With TOP.

3 Reasons Top Is A Leader For Ebooks To Read.

3 Reasons To Advertise With TOP as Soon As Possible.

2 Main Reasons To Think About Going With TOP Translation Platform

2 Reasons that TOP is Supreme for Content Creation Services.

3 Ways to Get Great Online Reviews.

The Importance Of Finding Great Photos For Any Website

Work on cell response to oxygen gets medicine Nobel.

How to trend on social media.

The Rohingya’s Right of No Return.