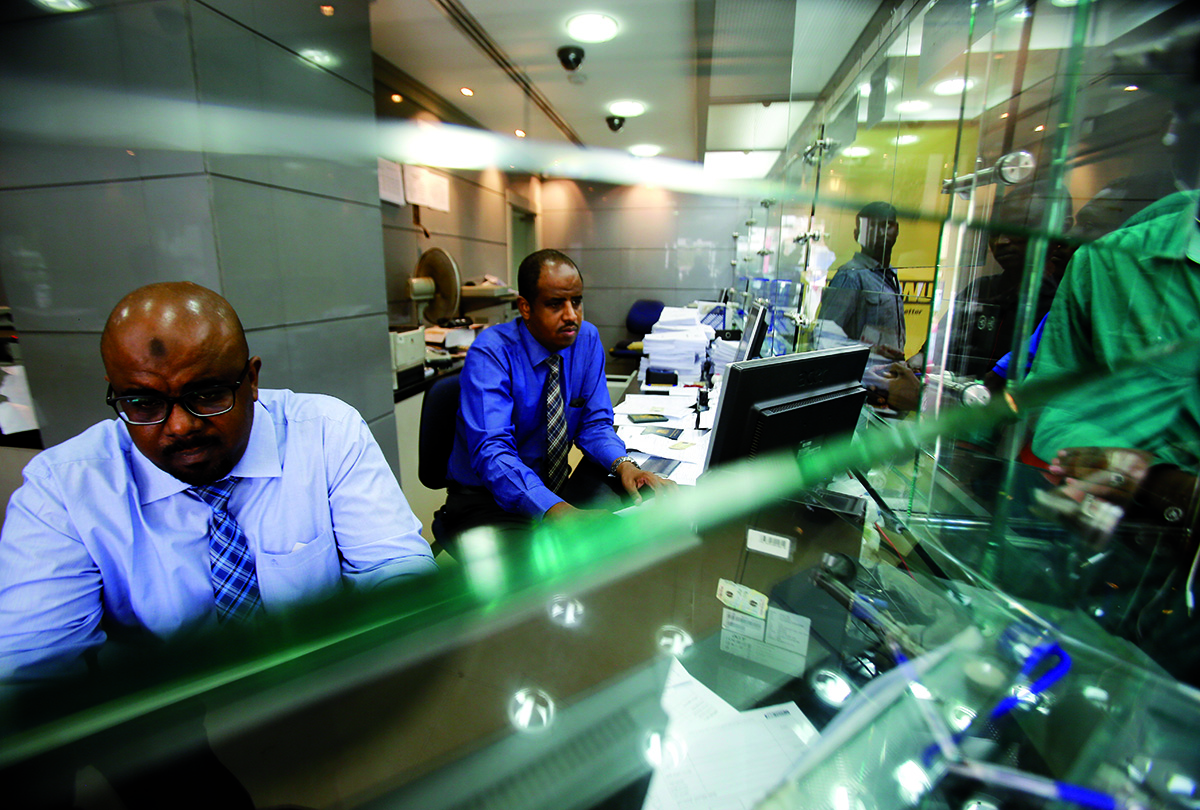 Dealers work at a foreign exchange office in central Khartoum on October 12, 2017, after the lifting of the US trade embargo came into effect. Sudan's central bank said it had received its first overseas fund transfer in US dollars since Washington announced the lifting of a 20-year-old trade embargo against Khartoum. / AFP PHOTO / ASHRAF SHAZLY

After dollar rates on Sudan’s parallel forex market began to rise rapidly in 2010, the Central Bank of Sudan (CBoS) announced that the lack of hard currency, required for importing basic commodities such as wheat or medicines, was becoming acute. The secession of South Sudan in July 2011, with which Khartoum lost more than two-thirds of its oil revenues, exacerbated the crisis.

As the situation continued to push the black market rate of the US dollar upwards in 2016, the Sudanese government decided in October of that year on an economic reform programme, “to avoid the collapse of the country.” In December 2017, the Sudanese government decided to implement a new austerity policy in an attempt to solve the financial crisis in the country. The customs rate of the US dollar was raised from Sudanese pound (SDG) 6.7 to SDG18, to halt the weakening of the Sudanese pound on the black market.

The measures were implemented in the first week of January 2018, leading to the doubling, and in some cases tripling of the prices of basic commodities. The sudden raising of the dollar rate also led to the halting of incoming and outgoing traffic at the Port Sudan harbour, as suppliers refused to have their goods cleared. The dollar rate, however, continued to rise. The price of gold witnessed a major leap too. On 5 February, Khartoum increased the exchange rate of the US dollar again, from SDG18 to SDG30. The prices of wheat and sorghum jumped. On 7 February, the CBoS banned any import operations by banks using their own foreign currency without obtaining its prior approval.

In early March, the dollar rate on the black market was at SDG32, after it sold at a high of SDG42 in early February. The National Chamber of Importers in Sudan planned to submit a protest memorandum to the CBoS about its policies concerning import procedures, stating publicly in the press that the bank’s current policies were damaging imports and importers. They also criticised the ban on a number of goods by the Ministry of Commerce.

These actions by the CBoS caused an initial collapse of liquidity. Bank customers complained that they at first could not withdraw more than SDG3,000 ($160). Later in February and early March, banks raised the withdrawal ceilings from SDG10,000 to SDG100,000. Each bank is now allowed to define its own limits, depending on the number of customers and the available funds.

Sudan’s liquidity challenges, due to the sanctions and embargoes, needed external support in order to solve them. Given the good relations and cooperation between Sudan and Turkey, the country signed an agreement on 8 March with a Turkish company to provide banking facilities for the CBoS to the sum of $2bn. This facility will be used to import petroleum products, wheat, and other agricultural inputs. The funding will be repaid over two years. The company has already started providing shipments of gasoline and cooking gas.

The liquidity situation is still a source of major concern. President Omar al-Bashir fired Sudan’s Foreign Minister Ibrahim Ghandour on 19 April after he said that Sudanese diplomats abroad had been unpaid for months. Ghandour, who negotiated the lifting of decades-old sanctions with Washington in October 2017, said the rent of several diplomatic missions had also not been paid. According to Ghandour, the situation had turned dangerous, which was why he had taken the issue into the public domain.

On 8 September, al-Bashir sacked his entire cabinet and reduced government ministries from 31 to 21. A statement from the President’s office said: “President Omar al-Bashir has informed that he will sack the government at all levels, the prime minister, federal ministers and ministers of state in order to fix the situation facing the country. “He will form a new government that can once again bring hope to the Sudanese people.” The measure was necessary to solve “the state of distress and frustration faced by the country during the last period”.

Dealers work at a foreign exchange office in central Khartoum on October 12, 2017, after the lifting of the US trade embargo came into effect.
Sudan’s central bank said it had received its first overseas fund transfer in US dollars since Washington announced the lifting of a 20-year-old trade embargo against Khartoum. / AFP PHOTO / ASHRAF SHAZLY