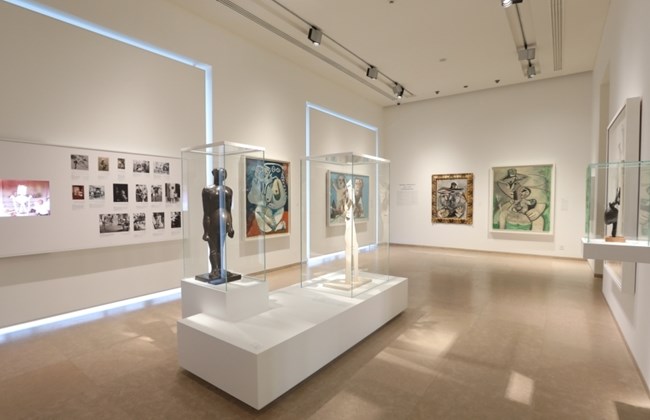 For the next few months, Spanish master Pablo Picasso’s work will be on show for the first time ever in Lebanon. Gracing the halls of Sursock Museum, “Picasso et la Famille” gathers 20 of his works spanning 77 years, from 1895 to 1972, marking notable moments in his tumultuous and emotional family life.

Organized with the support of the Musee National Picasso-Paris, the Culture Ministry, the French Embassy and contributions from Daniele Edgar de Picciotto and Cyril Karaoglan, the show is the final stop of the “Picasso-Mediterranee” project, which has been touring the region for the last three years.

“It’s a very symbolic moment for us to celebrate the strength and the energy of the artist,” MNPP head Laurent Le Bon told The Daily Star, “telling this story to the Lebanese people of one of the greatest geniuses in the world, in a country of gatherings, meeting and where Picasso’s message of peace is very important.

“Everyone here is very focused on family, perhaps more than other parts of the world, so it was important for us to show that Picasso was also concerned with his family and children,” he added. “He had a complicated life and a big family – Picasso, who would say ‘It took me four years to paint like Raphael, but a lifetime to paint like a child,’ and I think this [exhibition] celebrates that idea very much.”

Curated by MNPP project manager Camille Frasca and Sursock head of collections Yasmine Chemali, the show is split into four district sections of Picasso’s life and artistic career, seen through the lens of his ever changing family dynamic.

The first stage, “Origins,” begins with his 1895 painting “The Barefoot Girl,” which was created aged 14 and in the same year his younger sister Concepcion died of diphtheria. His meticulous representation of this destitute street child is often thought to represent Picasso’s feelings about his sister’s fate, a product of the poverty his family lived in at the time.

Drawings from his late teens show his mother and sister Lola – this affection for the women in his life would later shape his entire career. The section also explores the effect of his first marriage in 1918 to Ballet Russes dancer Olga Kokhlova and the birth of his first son Paulo.

“In the second stage ‘Tumults’ we explore the tumultuous and very violent period in Picasso’s life between the ’30s and the ’40s with the civil war in Spain and then the World War II,” Frasca told The Daily Star. “He explored this period with iconography linked to violence the idea of the family being split up and women crying.”

This stage of Picasso’s art flip-flopped between dark, meditative paintings on war and cruelty like his 1937 “Guernica,” and paintings depicting the multiple women and children that he had become involved with.

Still married to Kokhlova, Picasso began an affair in 1927 with Marie-Therese Walter, who inspired many works from that time looking at sexuality and fertility. Soon after their child Maya was born in 1935, Picasso began another relationship with Dora Maar. With each new partner, his artistic style and technique would also change and develop.

“The third stage is a much more joyful period just after the World War II, where he met a woman named Francoise Gilot and had two children, Claude and Paloma, with her,” Frasca said of the “Games” section. “It’s a very colorful and joyful period where he explored his children’s drawings and creating art with his children, so a lot of new shapes and forms came into his work. We’ve looked at this time through paintings and sculptures, child-like drawings.

“The last section, ‘Fictional Families,” refers to the ‘late Picasso,’ which is a very specific period between the middle of the ’60s to the end of his life in 1973,” she added. “It’s not often seen or spotlighted for the public and is a beautiful selection of big format paintings linked to the theme of the couple, eroticism, motherhood and the father-child relationship.”

Though many have pointed out the irony of Picasso being a family centric man, despite having had many affairs, marriages and divorces, Frasca believes it was part of his creative character that always drove him to find new experiences.

“Picasso was a man who wanted to live and create so he’s not the traditional family man, he had many women and children, but life goes on – he’s a creator, so children and women also go on in his life,” she said. “A creator is never alone so as the people in his life changed and he had new relationships, his artwork reflected that and developed alongside them.”

he Phoenicians, Romans, Byzantines, Greeks, Arabs and Normans all left their mark on the city making it a fascinating place to discover.

Getting The Best In Online Marketing With The Trend It Service.

Want To Start Selling Your Photos Online? Here Are the Steps to Follow.

The Best Place For Online Ebooks.

Authors Can Make Money Online By Opting To Sell Ebooks With TOP.

2 Great Reasons To Go With TOP For Content Creation.

3 Benefits You Reap By Doing Translation Services For TOP.

Where to Find The Best Quality Translation Services.

4 Great Benefits To Advertising With TOP.

If Facebook and Google don’t fix their problems, advertising execs say they could go somewhere else.

US inflation picks up in April as spending slows.

Australia’s Richest 2019: In A Down Year, Two Miners Break Back Into The Top 50.

Trump’s tax overhaul is taking a serious toll on the Hamptons real-estate market.

Why is the Brecon by-election so important to Boris?.

Millions In India Face Uncertain Future After Being Left Off Citizenship List.